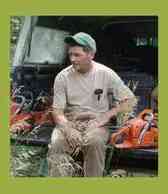 ​Bill was a Professional Forester for nearly forty years.  In the last 25 years of his active career, he consulted with private landowners in Iowa, spanning from the upper Mississippi to the Missouri/Big Sioux Rivers.   He worked with these landowners to preserve their woodland for future generations - choosing to either plant and grow
new a woodland or renew the present woodland that had degraded.    Beginning with a timber management plan, his work entailed crop tree selection and release, sustainable logging, and tree planting.  He planted over two million seedlings in Iowa throughout his career.

This vocational journey left him with a deep appreciation for the natural communities that once competed for possession of the territory.  While conducting sustainable logging, he took a fresh look at  tree forks that were rejected by lumber mills and discarded into waste piles.  He envisioned creating beautiful wood flats from the wood that would otherwise be burned or rot in the woods.  Knowing this wood held intense character and beauty, he decided to salvage the forks and find a way to transform these into functional pieces for the home.  During the last seven years of his active logging career, Bill selected forks of Iowa hardwoods and brought them to his acreage in Janesville.  From this was born Natural Flats - where flats are "art with a purpose".
Bill wrote and published  Forest on the Fringe in 2007.  The book was written from the viewpoint of Sapien, a fictional character in the woods, whose conversations are the means by which readers learn about the evolution of the woods and the importance of protecting the ecosystems around it.  In 2014, Bill was bestowed the Frudden Award by the Iowa Society of American Foresters for his significant contributions to the forestry profession
​over the course of his career.  Bill and his wife, Wahneta, live in rural Janesville, Iowa where they raised six daughters.

​
"Mother Nature is the artist providing the pattern, color and grain design.  I work with each piece to create a durable, beautiful and functional heirloom for your home".   Bill Haywood